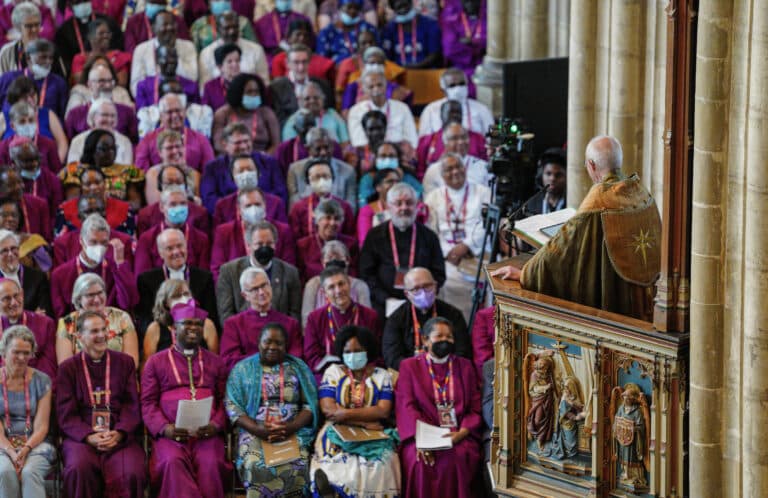 It’s a conference, meaning that this Anglican gathering that normally happens every ten years is not a synod of all Anglicanism, since in the Anglican tradition synods include laity as well as clergy who are not bishops. Nor is it the determinative governing body of all Anglicanism, since in the Anglican tradition all Provinces, while intimately linked in bonds of affection and many other ways including what should be recognizable liturgical identity, are legally autonomous. The Conference does not have juridical authority and never has.

And it’s bishops, meaning that the purpose of the gathering is simply, but in my view crucially, for those who hold the apostolic office of bishop with all its responsibilities to meet, encourage, learn from, and support and pray for one another in a concentrated time of study, comparison, discussion, and intelligent thought.

The Anglican Communion is more than a federation but is intentionally not monolithic. Rather, as in Orthodoxy, region, context, and culture or cultures are taken seriously. Therefore in the Anglican Communion—that is, the totality of those Provinces and Churches—true unity is to be sought, found, explored, and celebrated in genuine and faithful Christian diversity, not in uniformity. There must, certainly, be fundamental union around commitment to live by the scriptures, the historic creeds, the sacraments, and the episcopate; foundational, too, are the unfolding Tradition, most especially Christianity’s deposit of deep thought and teaching down the ages, as well as divinely created human reason. But the Province or Church that serves each part of the world, whether covering a single country or a whole multi-country region, will express itself in ways that are best suited there for telling and living out the good news of the love of God in Christ, and the arrival and flourishing of the kingdom of God.

In the past, some (though not all) Lambeth Conferences have passed what they have called resolutions on various Christian and topical issues of the day. This time the Archbishop of Canterbury, the Communion’s Primate of Honour, whose predecessors have from the beginning been the convenors and hosts though as first amongst equals, decided that there would be no voted resolutions, precisely to avoid the always untrue supposition that such resolutions had juridical status. Instead, there would be a series of Calls—to the Anglican Provinces, to all Christians, to the world and its major figures or organizations—that would be invitations to respond appropriately and imaginatively.

So it was that the Calls, which were extensively discussed and prayed over, focused on the areas of mission and evangelism, discipleship, Anglican identity, Christian unity, interfaith relations, reconciliation in all its forms, science and faith, safeguarding, human dignity, and the environment and sustainable development. The expectation is that at all levels within Anglican Provinces, dioceses, and parishes, work will be fostered around these Calls, if what we bishops came up with strikes a chord.

Most of the Calls met widespread approval but there were one or two whose wording met with mixed reactions. The Call on Human Dignity, for instance, is in fact about multiple aspects of how Christians believe human beings, created in the image and likeness of God and dearly and unequivocally loved by God, are to be understood and treated. Attention, however, was focused on the much-debated area of human sexuality, or rather homosexuality and homosexuals in particular. Clearly some of us bishops see things differently from others of us. It was feared by some, and apparently welcomed by others, that, despite Archbishop Justin’s clear assurance before we met that it was not to be a Conference of resolutions, the late introduction into the suggested text of this Call of a mention of just one resolution of a previous Conference, the contentious Resolution 1.10 of 1998, would make a definitive statement or judgment. It must be said that some who welcomed that possibility laboured under the delusion that it would have juridical authority.

In the end the text was further reworded and the Call, in all its comprehensiveness, was approved. Archbishop Justin meanwhile had stated in a heartfelt speech from the platform that he would not, because he could not, expel any Provinces from the Anglican Communion for taking actions pursuant to their conscientious stance on this issue or any other issue that conflicted with the conscientious current stance of other Provinces. At the same time he articulated powerfully his desire that we should simply be truthful and gracious about the fact that on some though by no means many issues we—bishops, Provinces, dioceses, parishes, individual Anglicans—find ourselves in different places but do not need to break communion with one another.

As for Resolution 1.10 of a previous Lambeth Conference, it has the status that it has always had: that of a resolution on the record, passed by a majority of bishops twenty-four years ago but voted against by others, in a particular year of the Communion’s unfolding discernment. No less status than that, but no more.

For me it was an unforgettable privilege to be at the Conference, as it was in 2008.

The best parts? The small group I was in, for bible study and deep exchange of views, turned out to be a place of solid trust. We were a microcosm, from as far apart as South Sudan, Canada, and the Isle of Man, with unashamedly different positions on certain things but a shared commitment to the Communion—and to all aspects, delightful and not so delightful, of the calling of bishops. The two major eucharists in Canterbury Cathedral were thrilling and felt authentic to the living Anglican inheritance. And the sheer pleasure of sharing things about our Diocese of Cyprus and the Gulf and our Province of Jerusalem and the Middle East with others who barely knew of us and were amazed at what they heard, and hearing about others’ lives and places that I didn’t know or appreciate beforehand, was great. One special privilege was that our Province was asked to lead one of the daily eucharists, which we did in Arabic, Persian, and English; I concelebrated with Archbishop Hosam Naoum.

The less than wonderful parts? A music group that played and sang at every single service every day who were clearly fine musicians and singers of a particular sort and from a particular expression of worship but seemed able only to be loud and long and smilingly positive and unavoidable! There is a place for gentleness, a place for silence, a place for brevity, and sometimes a place for lament. Finally, I enjoy walking but the huge spread of the leafy campus of the University of Kent, compounded by the fact that where I was allocated to eat was as far as possible from where I was allocated to sleep, and both were some way from where all the talks and gatherings were, meant that my step count, in a sweltering British summer with no evident air conditioning on arrival anywhere, was unfeasibly high.

I was, I believe, strengthened as I approach my 24th year in episcopal ministry by this encounter with so many richly varied fellow-practitioners of it.  I was reminded that bishops and their work are for the Church and for the world—because we are all God’s Church for God’s world, the chosen title of this Conference—and have little meaning or value apart from the Church and our God-created world. I offered up in prayer our own diocese and Province, in all their fragility and with all their unresolved issues, and I trust the Holy Spirit will continue to lead and guide not just me but us—all.

Above: The Archbishop of Canterbury’s Closing Sermon (credit: Lambeth Conference) 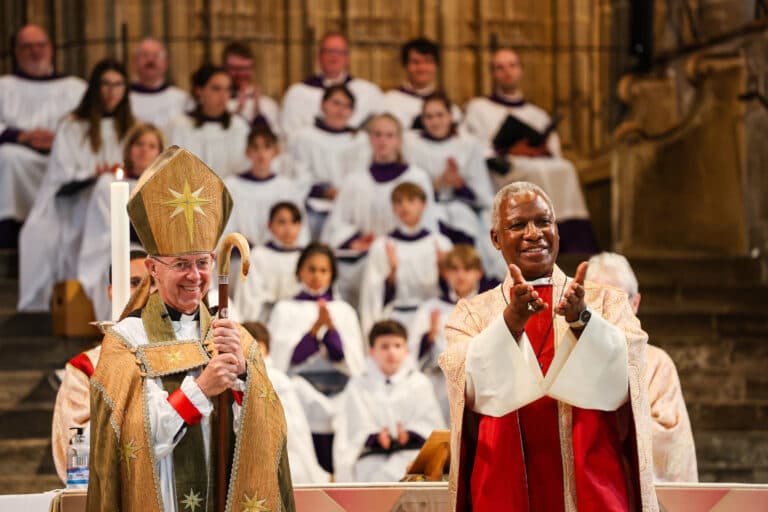 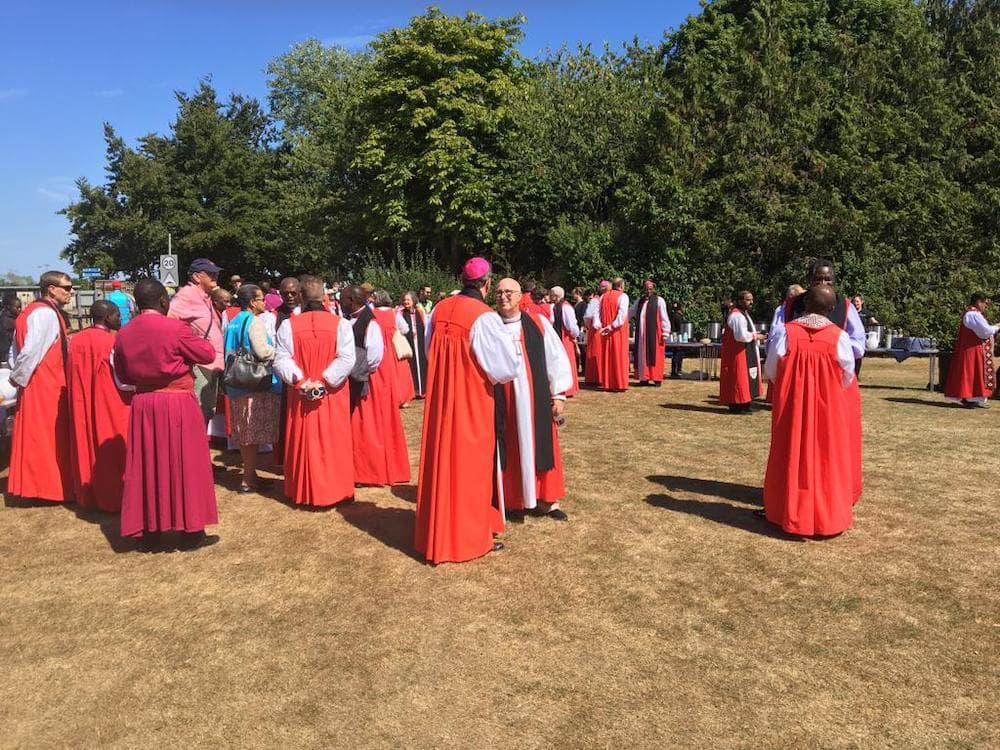